The menu features such popular items as the trademark BBQ baby back ribs, chicken, the finest AAA and Certified Angus Beef steaks, craveable appetizers, crisp salads, signature burgers and sandwiches, seasonal vegetables, premium seafood, lobster in season and decadent desserts.   As Bâton Rouge banner Chief Operating Officer Stanley Goodman was pleased to share with me, “our restaurants are so focused on making everything from scratch. Nothing comes out of a box.” 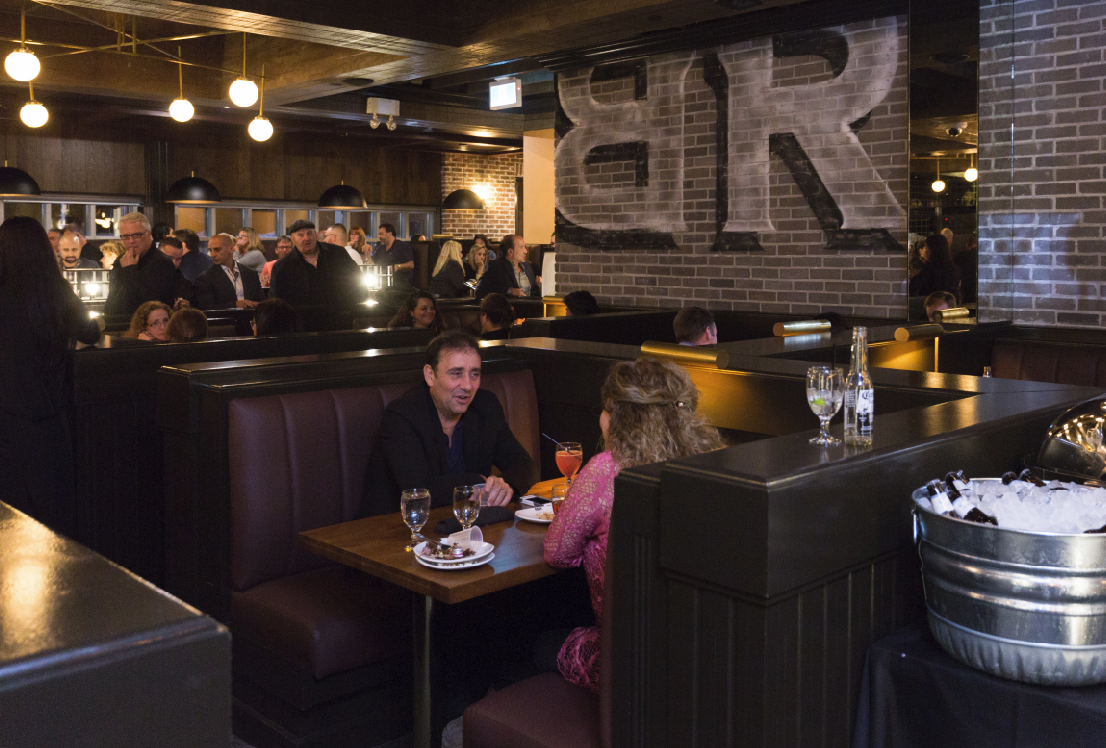 I recently enjoyed a lovely evening at the Dollard des Ormeaux location on Boulevard St. Jean with my mother and sister. It was a rare opportunity for the three of us to dine together and it was no coincidence we chose Bâton Rouge. This was my mom’s 79th birthday and like me, this is one of her favorites.

Our server Joanna told us about the day’s specials. While my mom enjoyed a glass of wine we reviewed the extensive menu. I was tempted to have the creamy potato soup, one of my favorites, but opted instead to share a mixed salad with mom. The dressings are freshly made in-house: honey-mustard, garlic ranch, Italian, creamy blue cheese or lime-ginger. We chose the honey-mustard. The portion was perfect for the two of us.

My sister was eager to try one of the dinner salads and she chose the chicken tenders, featuring hand-battered chicken tenders, mixed greens, croutons, chopped egg, smoked bacon bits, hearts of palm and artichoke  and avocado. It was a sizeable portion with enough for her to take home for lunch the following day.

I never come to Bâton Rouge without enjoying their bbq pork back ribs:  slow-cooked at low heat for  eight hours until they’re mouthwateringly tender and basted with their made-in-house classic  BBQ sauce. While I normally have the ribs and chicken combo, I decided this time to pair them with the six ounce grilled lobster tail and garlic butter. Well I did not leave anything on my plate, it was that delicious. 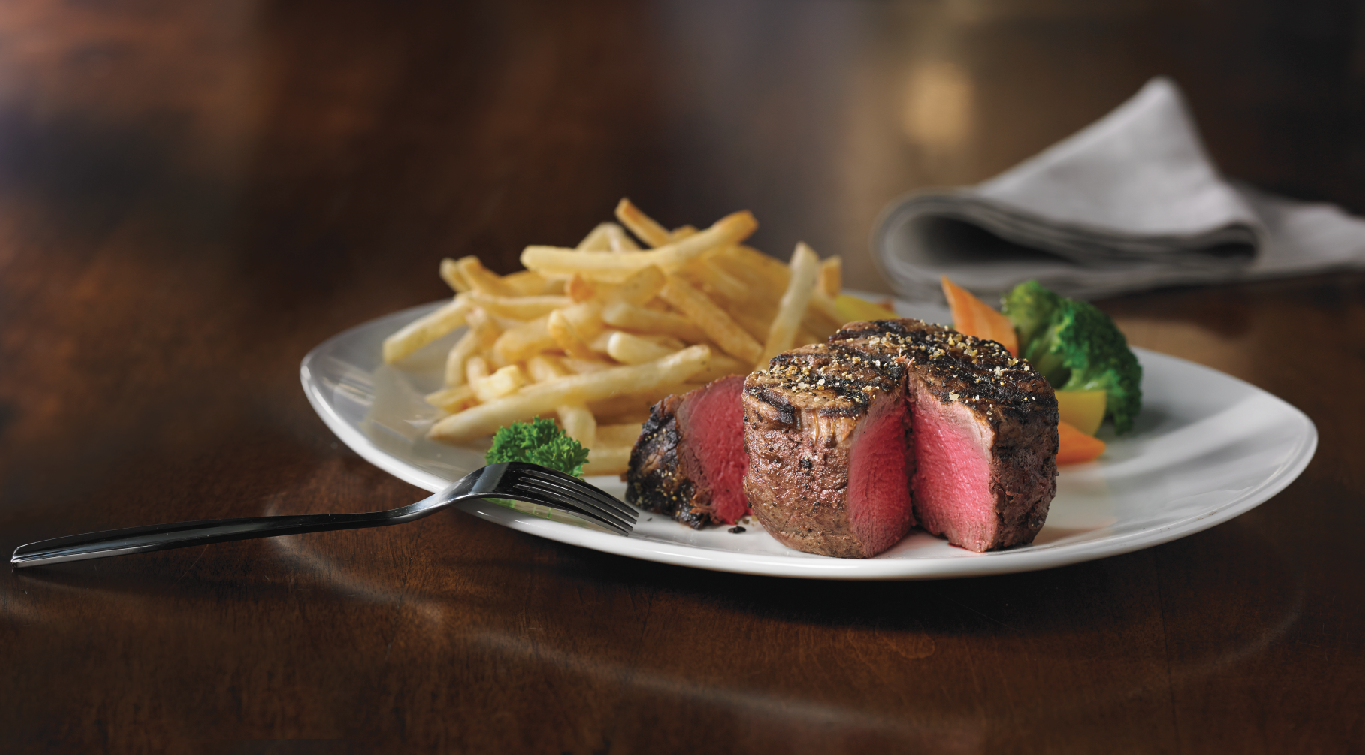 My mom was eager to try the filet mignon, a seven ounce portion aged for 28 days and grilled to melt-in-your-mouth tenderness. Both of our entrees came with one choice of the following sides: garlic mashed potatoes, baked potato, sweet potato fries or seasonal vegetables; or two choices of: French fries, coleslaw, baked beans, wild rice pilaf or hot cinnamon apples. I chose the mashed and rice while my mom went for the rice and vegetables. Next time I come here I will try the rib steak, which I am hearing great things about. 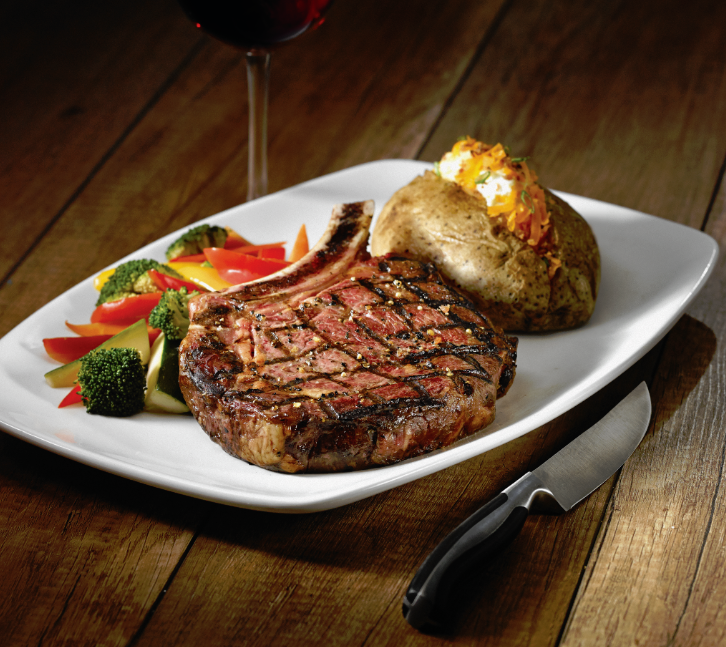 Without having to even ask, Joanna surprised the table with a decadent chocolate walnut brownie with a big sparkler to officially ring in my mom’s 79th. Chocoholics can rejoice over this rich chocolate and walnut brownie. served warm with French vanilla ice cream.  My mom could see how I eyed this piece and not a fan of chocolate she ordered   their famous, warm apple cobbler with a touch of cinnamon and brown sugar on a layer of rich caramel sauce, sprinkled with walnuts and topped with French vanilla ice cream. Bâton Rouge also has a selection of gluten-free desserts. 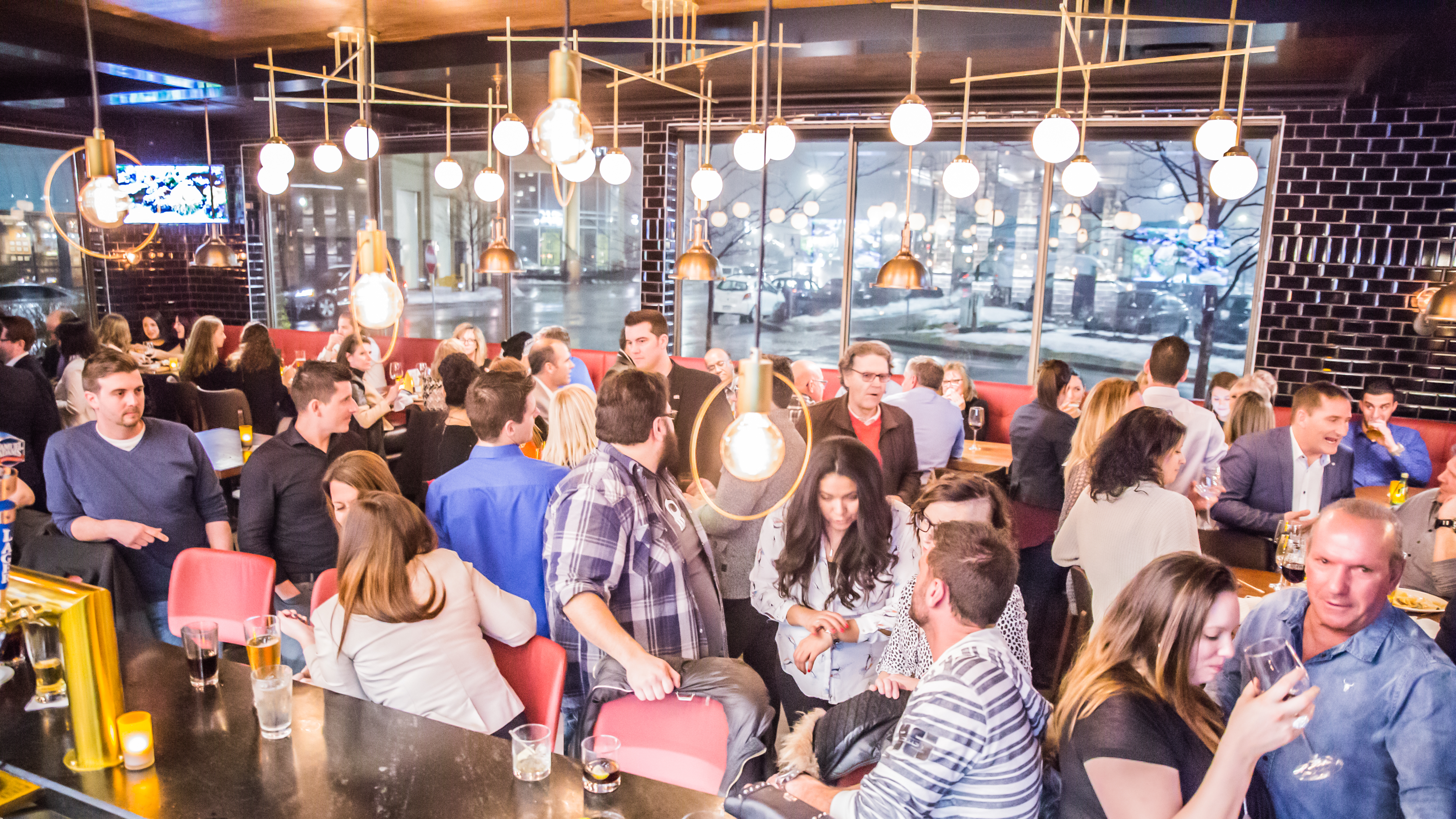 As Goodman notes,  Bâton Rouge franchisees are all very implicated in their communities. In Dollard, owners John Frintzilas, Peter Gianopoulos and Jimmy Sotiropoulos have raised over $500,000 since 2011 with an annual dinner benefitting the Lakeshore General Hospital.

Maria Frank, who serves as the marketing advisor for the Bâton Rouge group, notes that supporting community programming is part of the brand’s culture. “Community outreach is in our DNA,” she said.

In the Greater Montreal area and nearby, besides Dollard there are Bâton Rouge locations in Vaudreuil, Anjou, Boucherville, Greenfield Park   Boisbriand, Candiac, downtown on de la Montagne and Complexe Desjardins, Decarie and Laval.    The latter is about to get a major makeover. In May it will move to another section of Carrefour Laval and take over the former Restaurant Portovino spot.

As for expansion, Goodman said that he expects significant growth to occur in Ontario in the next few years. Bâton Rouge, along with Scores, Ben and Florentine, Mike’s and Pizza Delight, were recently acquired by the MTY Group which already owns Madison’s New York Grill & Bar and a slew of fast food outlets.

For more information about Bâton Rouge, review the menu and to find a franchise near you log on to www.batonrouge.ca.